Enter from the Dragon’s mouth and exit from the Tiger’s. Oh, you can even see their behinds on the way out. Head to a Buddha Museum to learn all about his life. Kneel or sit cross-legged and contemplate your life (or his). Finish your day at the 70 year old Liuhe Night Market. Kaohsiung offers all that in a span of a day. But really, a day here feels more like three weeks.

So yesterday, I whinged a lot about Tainan. I called it the city of ghosts. I haven’t changed my mind… But what I will say is that last night on the way to dinner, we accidentally encountered a Chinese procession that included: a lion dance, a dragon dance and numerous dancing palanquins complete with traditional live music. I tried getting some pictures but they were absolute rubbish given all the lights and movement.

My stomach  wasn’t too happy with me this morning, but at least I enjoyed the food on the way down. After that, I had a very uneventful local train to Kaohsiung: a city of approximately 2.7 million people. Goodbye Tainan! I won’t be back.

First stop in Kaohsiung: the famous Lotus Lake, a scenic area known for its temples and pagodas. 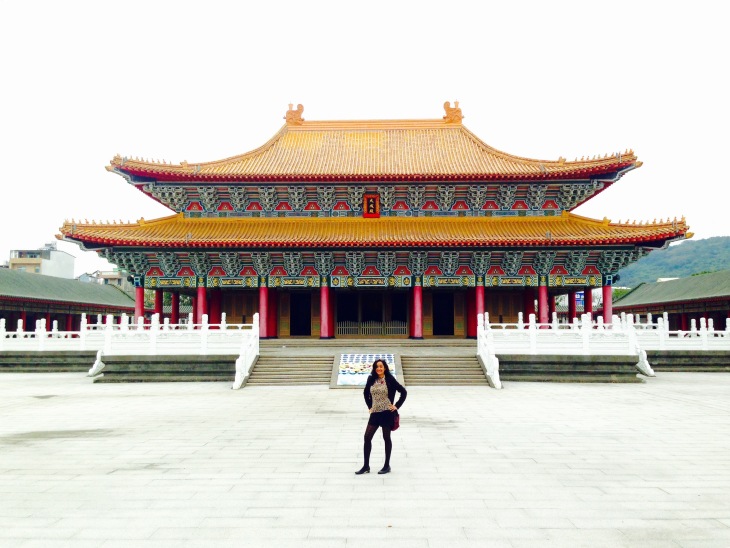 Unlike the Confucius Temple in Tainan, this one was magnificent. The best part: there was nobody there.

I grew up in a country with a Chinese majority. But it wasn’t until I came to Taiwan and stood amongst these historic buildings that I realised how close the Chinese culture is to my heart. How familiar the motifs and stories are to me. As I explained some of the elements of the Chinese belief system to my partner in crime, it dawned on me that Chinese culture has shaped me more than I consciously realised.

Seeing this in person is… really something else. Dedicated to Xuan Wu, the mysterious warrior, this imposing figure is revered as a powerful god. It is said that he is able to control the elements and is capable of great magic.

This place brought back so many memories of being a kid and going through Singapore’s famous Haw Par Villa. Man, that place with its ten courts of hell used to scare the crap out of me.

ANYWAYS, out here on Lotus Lake, it’s a bit of a different story. You go in through the dragon’s mouth, check out the behinds of the tiger and dragon and finish at the tiger’s mouth. On the inner walls of the dragon’s body you can see retellings of some old Taoist stories. 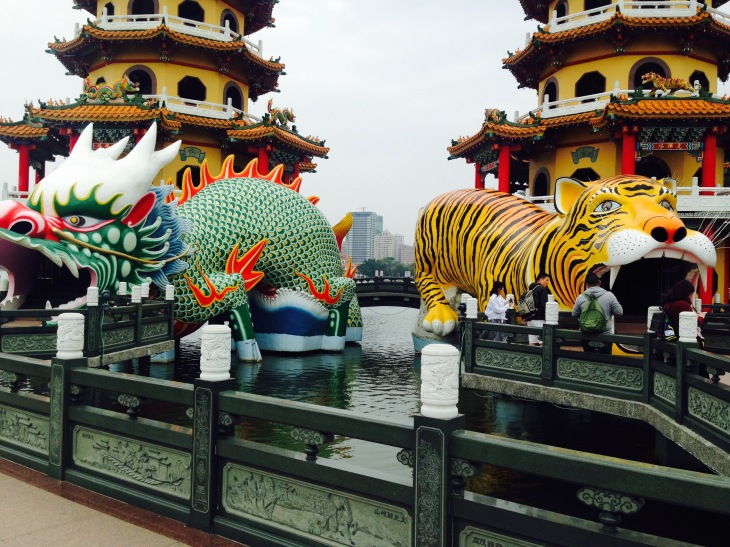 If you have the energy, you can climb to the top of the pagoda to see the view. There isn’t much to look at in terms of skyline, but you can see the zigzag pathway on the way to the dragon’s mouth. The path is zigzag to confuse evil spirits (and me too by the looks of things). 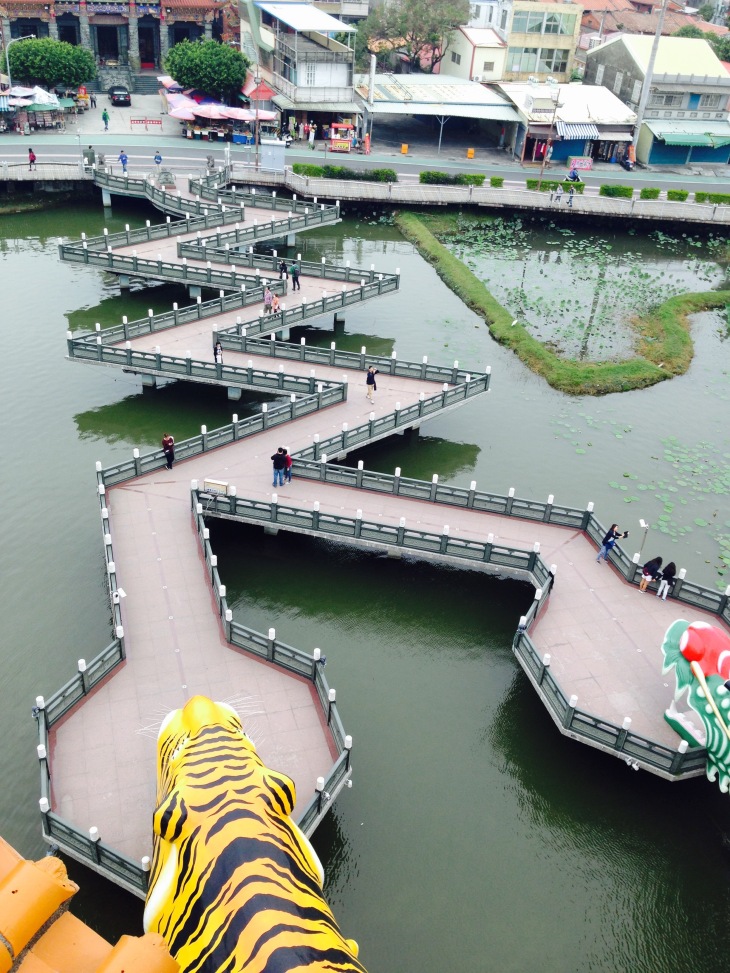 The internet is FULL OF RUBBISH when it comes to giving directions to this place. Trust me, it’s really not that complicated. From Zuoying MRT Station, it’s a 30 minute bus ride that costs TWD 70 (US$2.20). You will need exact change if you’re paying by cash. Be careful of cabbies who will try and rip you off while you’re waiting for the bus. It is the first and only time I’ve encountered such behaviour in Taiwan. It is amazing the things people will say when they assume you can’t understand what they’re saying.

Anyways, Fo Guang Shan is a monastery and temple ground situated on a hilltop. On top of the hill, there is an enormous 108 metre metal statue of a seated Amitabha Buddha. Some sights to see on the way up: a room with a Jade Buddha where you are welcome to pray and make an offering, another room with a Golden Buddha where you are welcome to do the same; as well as several museum exhibits ranging from: Taiwan’s religious heritage to Buddha’s life.

When you finally get to the top, you can stand there in awe while looking at Buddha’s serene face or perhaps even sit down and meditate for an hour or two. Just remember to get out of there before closing time at 7pm. 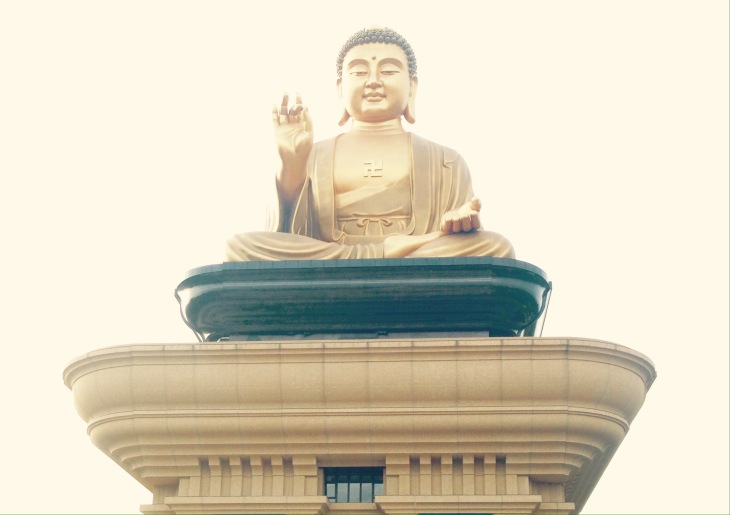 To eat dinner, we wound up at the very famous Liuhe Night Market which has been around since the 1940s. It’s got a good crowd, but isn’t as crowded as Taipei’s Shilin Market. Although Shilin Market was quite the feast for the senses, Liuhe was just much more laid back and enjoyable. We had quite a few nibbles.

All in all – an amazing day. 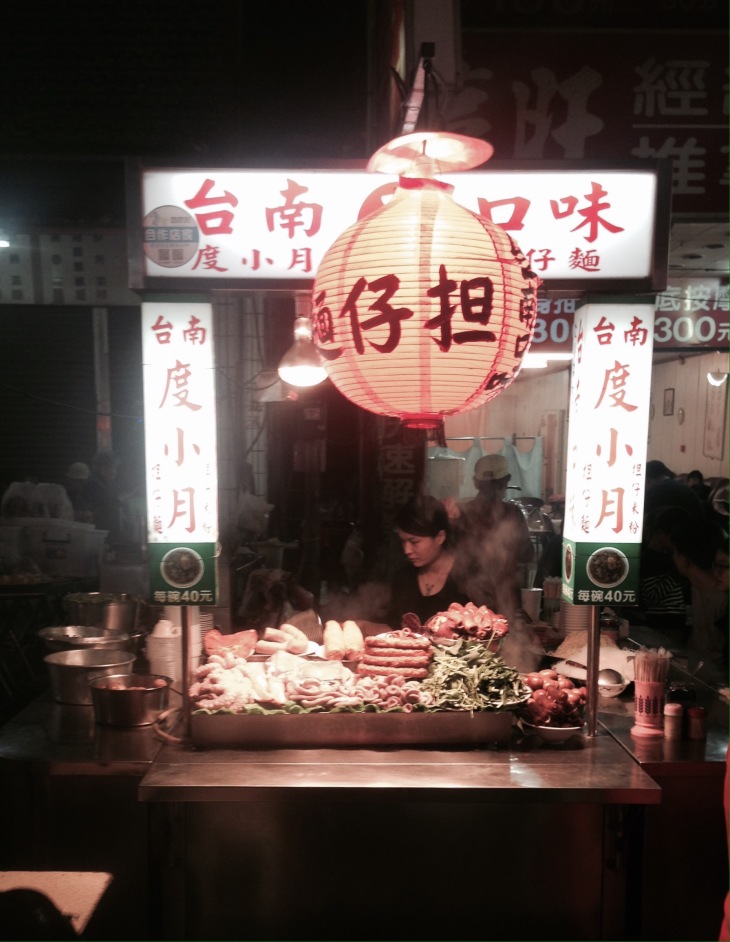 It’s now late-ish. I need to sleep. I really really do. It’s another early start tomorrow. The guy in the next room is singing really loudly (he should really keep his day job). Good thing I am no light sleeper.

Till next time. Goodnight.