When I woke up this morning, I just wasn’t in the mood to go anywhere. It was one of those days. After an action-packed three days, I needed sometime to take it easy, take it all in and just chill out before the next thing. But when you’re a traveller, you know you need to make the most of things – because who knows when you’ll be get the chance to do it again.

And so I woke up, got dressed and hit the road.

When I first visited Beijing last year, I took a couple of taxis and hated the experience. First, you have to communicate with the cabbies about your destination – which is a mission in itself. Many taxi drivers are not ‘locals’ and unless you’re going someplace really famous; there’s a strong likelihood that they may not know where it is and the cabbie will ask you for directions (!!!). The taxi drivers I met also tried to rip me off.

I’d rather take the train.

And then enter DiDi. It’s China’s Uber. If my mother knew I was taking these, she’d probably freak out – but hey. Firstly, you enter the address of your destination. Once you’ve done that, you get a fare estimate. And once you’re finally in the car, you can watch the driver take the designated route with no hanky panky. Or so one would hope…

Having said that, the drivers I’ve met so far look absolutely stunned when they see me get in the car. They act like their passenger is a unicorn.

Ah well – nothing I’m not used to.

The pollution was terrible today. Seriously. Somedays the smog is so bad the city smells like an ashtray. China’s environmental issue is covered extensively in the news for a reason. It is extremely unpleasant. The pollution here in Xi’an is also far worse than the pollution in Hangzhou. The cold dry winter doesn’t help.

ANYWAYS, there’s an ultra modern shopping mall called Joy City right next to the Giant Goose Pagoda. Why am I not surprised? China’s religious and historical past ‘peacefully’ coexists with China’s new found obsession with status and materialism. So once you’re done with your dose of capitalist consumerism, you can pop by next door for some history (or vice versa).

The Giant Wild Goose Pagoda was originally built in 652 CE during the Tang Dynasty to collect Buddhist materials and relics. Xuanzang, the first abbot of Da Ci’en Temple, supervised the building of the pagoda inside the temple grounds. It was also during that time that some 1,335 volumes of sutras were translated from Sanskrit to Chinese. You can see volumes of these on display at one of the halls. (I didn’t take any pictures out of respect. After all, it is a place of worship.)

The same way Christianity influenced the West, Buddhism influenced the East. Both religions also have a far far larger following outside their countries of origin rather than within it. And of course, Chinese Buddhism has elements of China’s original Taoist beliefs – the same way Japanese Buddhism has elements of Shinto beliefs. The ancient ‘folk religions’ continue to influence the ‘newer’ organised religion. 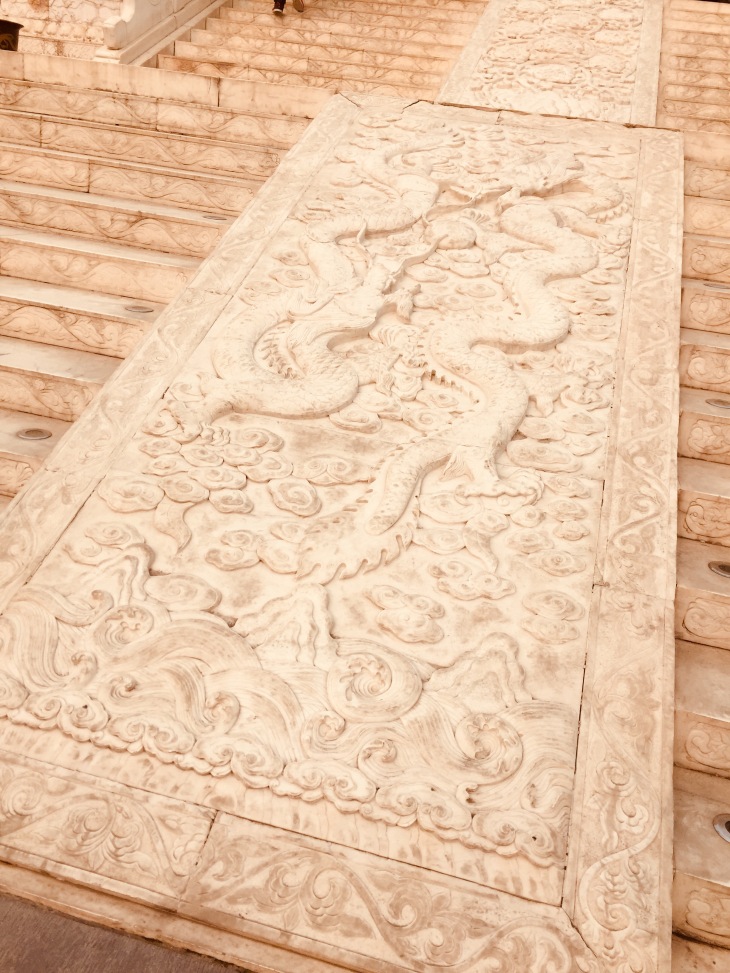 I had to climb seven flights of stairs to get to the top of the pagoda. I wish I could say that the view from the top was worth it, but it really wasn’t. All I saw was a city bathed in a sea of smog.

Times like these I’m glad we modern humans have elevators.

In the past four days in Xi’an, I visited numerous places of worship: from Taoist to Buddhist to Muslim. But apart from the Great Mosque, it was hard to get a feel for the ‘spiritual’ side of China. Clearly from the temples and the relics – a spiritual side must have existed once before. But to me, these places feel more like tourist spots than places of worship.

Never say never, but I highly doubt I’ll be back in Xi’an.

Xi’an was once the ancient capital of China – and you can certainly feel it. No one stares at me – or even bothers with a double take. You can see layers and layers of history everywhere you turn. The city’s many historical monuments, ancient ruins and tombs give you the sense that many important events occurred here. After all, Xi’an was an ancient imperial capital and eastern departure point of the Silk Road.

But still, it has the feel of a has-been city. There is a vague sense that the good old days are long gone; and that they won’t be coming back.

Till next time – sweet dreams. I have a plane to catch tomorrow.