Xi’an. Oh Xi’an. How quickly you captured my imagination and my soul. I just got here and I already feel right at home. Must I leave in a couple of days?

Having lived in Japan for so many years, I forget that the world is a multiethnic, multicultural place where people from different creeds can just live together and get on with it. China, like Japan, is largely a monocultural society. But unlike Japan, China has a sizeable number of ethnic minority groups. Although the percentage of ethnic minorities is tiny in comparison to the Han Chinese; there are some 10 million Hui People in mainland China. To put things into context, that’s close to twice the population of Singapore.

And today, I wandered back to the Muslim Quarter of Xi’an to do some proper sightseeing. It was 11.30am by the time I left the hotel. Hey – you can’t blame me for wanting to snooze on New Years Day. I’m surprised I even managed to get out of bed. Given the cold weather and relatively long walk, I was hungry by the time I arrived at my destination. It was time to grab some food.

I picked a place that was packed with locals. It looked really modest from the outside, but I quickly noticed the avalanche of plaques from at least a dozen different awards the moment I walked in. I knew I’d picked the right restaurant. No idea what the restaurant’s called and given my poor sense of direction, I’ll probably never find it again either – but I’ll definitely remember it for the rest of my life.

Some meals are an experience to remember for the rest of your life.

A bowl of paomo costs 35 yuan US$5 and let me tell you – it was so good I’m going to have dreams about it tonight. I mean seriously. But before I tell you about the mutton soup, I must first tell you about the intricate preparation procedure.

I ordered at the counter and the lady gave me a bowl and two small buns. I proceeded upstairs and looked at what everyone was doing. Hey – don’t pretend you’re not a tourist when you are. Everyone can tell from your befuddled, confused and deer-in-the-headlights expression.

So the first step is to tear the bread into little bits. I was surprised by how hard and unyielding the bread actually was. None of that soft, sweet, icky stuff that seems to be ubiquitous in pseudo-bakeries everywhere. I was tempted to sample the bread ‘raw’, but figured it would be best if I waited for the broth. It took me around 10 minutes to finish tearing the two buns.

That’s a lot of work for a bowl of soup.

After I was done tearing it, the cute old lady who was serving me whisked away my bowl of torn bread and gave me an order number. The couple sitting across from me had arrived before I got there; and they were still tearing their buns. It’s suffice to say their pieces were smaller than mine.

“Have you eaten this before?” the waitress asks me in Chinese.

I shake my head.

“Where are you from?” she asks.

“Singapore,” I answer in Chinese. Xīnjiāpō.

I shake my head, mildly amused. Ever since I came here, people have been asking me if I’m from Xinjiang. My Mandarin is fairly decent and most people can’t place my accent so they assume I’m from one of China’s ethnic minority groups.

“Singapore,” I repeat in Chinese. Xīnjiāpō

We proceed to have a small conversation. What are you doing here, where do you live and do you have a Chinese husband? Hmm… about that last question…

I still find it hard to understand the northern accent in China – but I am slowly getting accustomed to it. As a Singaporean I speak the southern variant of Chinese, which is relatively different from the northern dialect. Anyways, despite the language barrier, true warmth is something that anyone can understand. And the lady had a real mama’s vibe going.

A few minutes later, my mutton soup arrived. I can’t say it looked like much. But the moment I took a sip, I was transported to another world. I believe they call it heaven. I can’t honestly say I’ve tasted anything like it.

The lamb was so tender. The soup was crazy packed with flavours without being gamey; the bread was still hard and slightly crunchy despite being soaked in broth. I can’t say I’ve eaten anything like it – but I will say that it is the best damn soup I’ve ever had.

Eating this soup made me believe in God all over again.

After the great lunch, it was off to the Great Mosque. The construction of the mosque started around 742 CE during the Tang Dynasty. The first thing that hit me as I was walking towards it was that it doesn’t look or feel like a mosque. If it wasn’t for the call to prayer that was blaring from the speakers, I don’t think I would have figured it out on my own. The architecture is more Chinese than it is Islamic.

According to what I’ve read, Islam was introduced to China by Arab traders during the Tang Dynasty: which is considered by many to be a golden age in China’s history. The Muslims who settled in China married the local Han Chinese in the area. The Great Mosque was built to honour the founding fathers of Islam in China.

Walking around the Muslim Quarter and the Great Mosque took me back to my childhood days in Arab Street in Singapore: a place where cultures meet, collide and trade.

And so I sat at the bench, listened to the birds and heard the call to prayer. It had been a long long time since my heart felt that at peace. 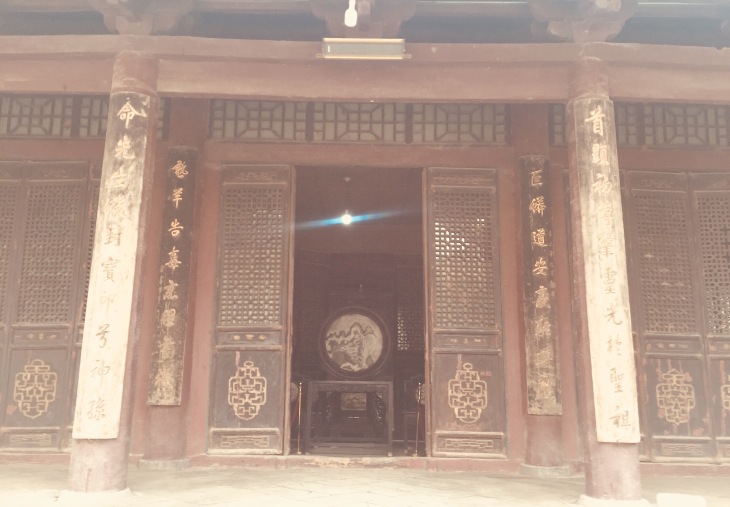 The Bell and Drum Towers

And then it was off to the Bell and Drum Towers. You can’t miss these two structures. They’re right smack in the middle of the modern part of the city. And yes – one tower has a bell, and the other tower has a drum. The towers are impressive, but there’s nothing really to do there. It costs 50 yuan (US$7) to enter both places (or 30 yuan each). The Drum Tower has a performance, but it was so packed with people that it’s difficult to enjoy it.

It wasn’t a bad experience, but nothing to write home about either. 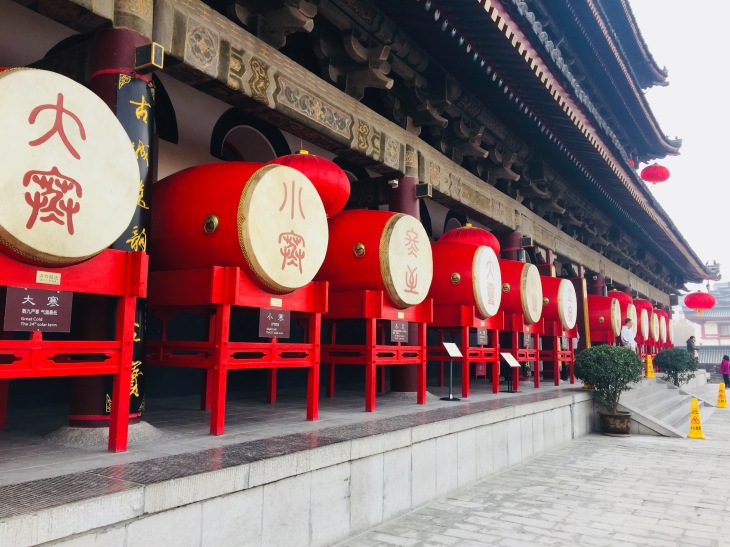 And to finish, I went to the City God Temple. This is my second ‘City God Temple‘ – the first was in Shanghai. The one in Xi’an is one of the two remaining Taoist structures in the city area. The temple is some 600 years old and I didn’t have to pay an entrance fee to pray… Hooray!

I prayed, made a wish and threw a coin. Here’s hoping it comes true.

Till next time – have a Happy New Year.

Founder of Mith Books View all posts by Dipa

✒Author Interview🖋 with Sanchari Das @sweet_sanchari_ Building her universe around world of books ever since her childhood, Dipa Sanatani likes to call herself Merchant of Stories. Spinning tales of love and life while exploring mystery of human existence in the vast universe, Dipa can't remember a time when she didn't harness the desire to be a writer. She comes from a family of merchants and educators with roots in Singapore and the UK. In 2007, she left behind her roots to discover her wings. With a background in both business and education, Dipa Sanatani established her own publishing house and made her debut as an author by self-publishing her book "The Little Light". Currently she is in Singapore, busy working on "Mith Books", her first business venture. I recently had the pleasure of conversing with the author and got the wonderful opportunity of conducting an exclusive interview. Here's a peek into Dipa Sanatani's self-publication journey. Q. Can you tell us a little bit about your background of becoming an author with "The Little Light" as well as an entrepreneur with the launch of Mith Books? A: I've always believed that our real opportunities in life don't show up as a present neatly wrapped up in a bow. It takes a real crisis to force us to change direction and walk down a path we wouldn't have taken otherwise. I've wanted to be a writer for as long as I can remember. As a kid, books fired my imagination and transported me to a world far far away without leaving my bedroom. I completed a screenplay and two-full length novels before I finally published The Little Light. In 2013, I tried getting published the traditional way and failed miserably. I collected over 200 rejection letters that I imprinted into my broken heart. In 2019, I decided to try again. I couldn't be bothered with the unnecessary hassle of going down the traditional publishing so I started my own business Mith Books. The rest, as they say, is history. . To read the full interview visit: https://www.mithbooks.com . ➖➖➖➖➖➖➖➖➖➖➖➖➖➖➖➖➖ #love #likeforlike #like #recentforrecent #book #author #bookstagram #bookstagrammer #interview #publishing #journey #ble
On behalf of Mith Books, I would like to wish everyone a very Happy New Year. May your Little Light stay bright always 🔥 ⠀⠀⠀⠀⠀⠀⠀⠀⠀ #salmubarak #happynewyear #thelittlelight #dipasanatani #mithbooks #entrepreneur #businesspeople #gujarati
“May no night be too long. May no day be too bright. Shine on my life warmly and gently.” ⠀⠀⠀⠀⠀⠀⠀⠀⠀ -The Little Light by Dipa Sanatani ⠀⠀⠀⠀⠀⠀⠀⠀⠀ #thelittlelight #dipasanatani #mithbooks #diwali #deepavali #festivaloflights #hinduism #indianculture
THE LITTLE LIGHT by Dipa Sanatani 🔥 ⠀⠀⠀⠀⠀⠀⠀⠀⠀ On the eve of its birth, The Little Light finds itself in the topsy-turvy world of the Planet Party. ⠀⠀⠀⠀⠀⠀⠀⠀⠀ ⠀⠀⠀⠀⠀⠀⠀⠀⠀ The Sun, the Moon, Mercury, Mars, Jupiter, Venus, Saturn, Rahu, and Ketu - Celestial Beings from world mythology - bicker and squabble, just like any family. But they’re going to have to put their differences aside to help the Little Light - a wise soul, imbued with insight and curiosity - prepare for its birth on Planet Earth, where it has a great and far-reaching destiny... ⠀⠀⠀⠀⠀⠀⠀⠀⠀ ⠀⠀⠀⠀⠀⠀⠀⠀⠀ ⠀⠀⠀⠀⠀⠀⠀⠀⠀ In her debut novel The Little Light, Dipa Sanatani takes the reader on a voyage of awakening and discovery, ideal for lovers of mythology, spirituality, folklore and fairy tales. ⠀⠀⠀⠀⠀⠀⠀⠀⠀ Join The Little Light’s personal planet party in the Cosmic Womb! ⠀⠀⠀⠀⠀⠀⠀⠀⠀ READ NOW on Amazon, Flipkart & Kobo ⠀⠀⠀⠀⠀⠀⠀⠀⠀ #thelittlelight #mithbooks #dipasanatani #astrology #books #bookstagram #bookish #bookworm #planets #author #planetparty #bookaholic #fantasybooks #yabooks
Planet Mercury ♊️ from THE LITTLE LIGHT by Dipa Sanatani ⠀⠀⠀⠀⠀⠀⠀⠀⠀ ⠀⠀⠀⠀⠀⠀⠀⠀⠀ 🔥Enter the topsy-turvy world of the Planet Party, hosted in the Cosmic Womb. ⠀⠀⠀⠀⠀⠀⠀⠀⠀ 🔥Mercury - Messenger of the Gods - is a young business person. Impeccably dressed in a spotless white shirt and perfectly tailored black pants, Mercury governs the mind, the intellect and worldly intelligence. Witty, charming, and a bit of a trickster, he has a way with words and a young and youthful energy. He doesn’t like dealing with emotions and enjoys irritating his father, The Sun. ⠀⠀⠀⠀⠀⠀⠀⠀⠀ 🔥”Are you listening to me?” the Sun asks. ⠀⠀⠀⠀⠀⠀⠀⠀⠀ 🔥“No,” Mercury replies with a secret smile. “But that never stops you from lecturing me anyway.” ⠀⠀⠀⠀⠀⠀⠀⠀⠀ ⠀⠀⠀⠀⠀⠀⠀⠀⠀ ⠀⠀⠀⠀⠀⠀⠀⠀⠀ 🔥READ NOW on Amazon and Kobo! https://amzn.to/2WonFvq ⠀⠀⠀⠀⠀⠀⠀⠀⠀ ⠀⠀⠀⠀⠀⠀⠀⠀⠀ ⠀⠀⠀⠀⠀⠀⠀⠀⠀ 🔥Illustration by @sikha_prasad_90s ⠀⠀⠀⠀⠀⠀⠀⠀⠀ ⠀⠀⠀⠀⠀⠀⠀⠀⠀ #thelittlelight #mercury #dipasanatani #mercuryretrograde #planets #astrology #mythology #books #charactersketch #fantasybooks #bookstagram
#reincarnation #soul #death #life #rebirth #quotes #quoteoftheday #dailyquotes #mother